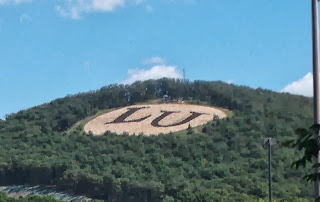 If you've lived in Lynchburg for more than a week or two, you've probably noticed the giant LU letters on the top of the mountain high over the city.

The mountain is known as Candlers Mountain or Liberty Mountain, depending on who you ask.

The two letters, and what they represent, divide Lynchburg neatly in two. LU stands for Liberty University, the largest Christian University in the world.

According to their website, Liberty University was founded by Dr. Jerry Falwell in 1971 as a small Baptist college known as Lynchburg Baptist College.

It almost seems as though the changes in the name reflect the divide felt by the citizens of the city whose name was once carried by the college.

On one side are the fans and supporters of Liberty University who feel that Liberty has created jobs and growth, contributing to the strength of the greater Lynchburg community.

On the other side are those who feel that the growth has brought with it a huge cost and that Lynchburg's people have carried the weight of Liberty's growth.

I stand somewhere in the middle. I agree that LU has created jobs and growth and contributed to the good of the community. I also agree that the growth hasn't been without cost. The traffic along Candlers Mountain Road can be insane at times and I try to avoid Wards Road as much as possible during the school year.

The college was young when I moved to Lynchburg in 1975. As someone who's been around for nearly as long as the college, it took me a long time to say, "Liberty University" when I was thinking "Liberty Baptist College."

I'm not a member of Thomas Road Baptist Church, the church at the foot of the mountain. I have attended numerous events at the university and the church, including my stepdaughter's graduation from LU and the wedding of my husband's nephew at TRBC, officiated by Jerry Falwell.

The uproar in Lynchburg when the mountain was changed by the LU monogram was immense. Anywhere you went, someone was talking about the letters.

The very idea that someone would have the audacity to remove trees from land they owned and replace them with a monogram was beyond the comprehension of many Lynchburg residents.

Almost like the Mona Lisa, the two giant letters seem to follow you wherever you go in Lynchburg. I've heard more than one person say, "I can't believe you can even see the letters from HERE!"

LU isn't the first university to put a monogram on a mountain. Lynchburg isn't the first small town to deal with the growing pains of an ever-expanding population of college kids.

I suspect that many of those who are the most upset by the LU letters are those who don't approve of the religious, conservative ideals on which the university was founded and which led to its growth. 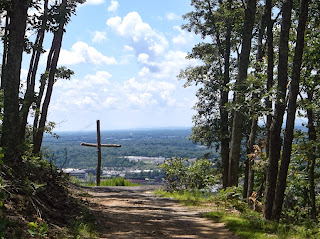 The vision before me was the cross, which I assume was erected by Falwell, standing high above the city of Lynchburg. A backdrop of the Blue Ridge Mountains and an endless blue sky stretched endlessly beyond the cross.

I can only imagine that this is where Falwell stood in 1971, wondering if he was making the right decision.

As he stood at the top of the mountain he loved, he must have been in awe at the beauty of the city below and the mountains beyond.

The simple wooden cross adds to the beauty of the mountaintop and creates a striking image that remains burned into your memory long after you return to lower ground.

I've returned to the top of Liberty Mountain many times since then. Each time, I walk first to where the cross stands to look down on the city I've embraced as my own.

According to a marker at the top of the mountain, the gazebo is is where Falwell sat with his son the day before his death, talking with the students of his university, students he'd grown to love as his own.

The next time you find yourself annoyed by the giant letters on the side of the mountain, take the time to drive up and see, as Paul Harvey would say, "the rest of the story." 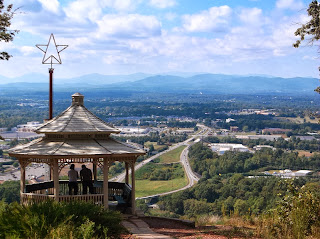 Drive up Candlers Mountain, turn in at Snowflex and follow the gravel road to the monogram.

You'll have to walk the last bit of the way if you're not in a four-wheel-drive vehicle.

But it's worth the walk. The views are incredible and may give you a little insight into the vision of Dr. Jerry Falwell so many years ago.

Their answer was no surprise, because it's the same thing that attracts me. Peace, tranquility and beauty as far as the eye can see. Well done, good and faithful servant.

Posted by Sandy Wallace at 7:57 PM